The Agility of The Man from Rioja 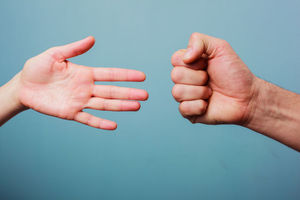 "One day, in the province of La Rioja, a colonel in our army was witnessing twenty year old recruits being examined by doctors with the purpose of finding out whether or not they were fit to be drafted.

One recruit, a huge fellow, came up, with an innocent look, and showed a closed fist, with the thumb tucked in so tight that not even with added assistance could the doctors open it.

When asked about it, he said that he had this since birth and he could never use his hand. Convinced that the man was inept to be drafted, the doctors dispensed him. But in that instant, the colonel, who was observing him closely decided to call him back saying:

– Tell me, young man, how was your hand before?

– It was this way, my colonel – replied spontaneously the smiling young man, showing his hand wide open.

As we reflected on this episode many years later, we extracted the following conclusion: that it is preferable to show oneself with an open soul, and never enclose oneself in a concept, whether one’s own or someone else’s, wanting to make believe to others what one is not, or what one does not have.