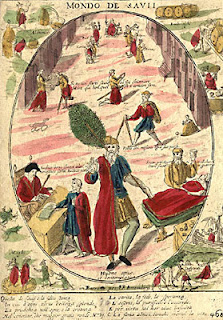 "– And you are not able – asked the wise man – to be happy in spite of all your wealth?
– No! – answered the rich man – I have everything I want, and need nothing else, except peace in my spirit and happiness.
– Then you need nothing else – answered the wise man – except to assign some value to the spirit."
(Legend, fable or narrative written by Carlos Bernardo Gonzalez Pecotche*)

"A powerful man, who was so wealthy that he was never able to measure his fortune, was thinking about how useless his life was, and how unfortunate he was to lead a life full of fears and anxieties.

“What is the use – he thought – of so much wealth, if everything bores me, and I am unable to free myself from the anguish that gnaws my soul!”

Concerned with this idea, he finally decided to consult a renowned wise man and ask him how he could solve this problem.

– And you are not able – asked the wise man – to be happy in spite of all your wealth?

– No! – answered the rich man – I have everything I want, and need nothing else, except peace in my spirit and happiness.

– Then you need nothing else – answered the wise man – except to assign some value to the spirit.

– Value...value... – whispered the man to himself; and as if he suddenly understood the insinuation, he said: – It is true. If there is no peace in my spirit, I will end up being consumed by an eternal unhappiness. But what should I do to be happy? Tell me.

– Look, from this very point starts a path. It is long, even though not so long that it cannot be covered in its entirety. At the end of it, you will discover keys that, as soon as they become yours, will make you the happiest man on earth. You may even be able to multiply your fortune a hundred fold if you so desire, but on the condition that you use it for good purposes and contribute to the happiness of others, which does not mean obviously that you will deprive yourself of what you want.

The powerful man looked intensely at the wise man, and after a moment of reflection, seemed to have come to a decision:

– What you said sounds very good to me. Today I will send my assistants to bring me those keys. Thank you for your advice.

The assistants left and after days and months had passed the bourgeois was still suffering with his boredom and inquietudes, which tormented him more and more. As his assistants had not returned, he sent others with the same purpose, but they did not return either. As the years went by and since he had not received any news, he became desperate one day and went to see the wise man. After telling him what he had done, he then inquired what causes might have motivated such long absence of his emissaries.

– Happiness, my good man – replied the wise man – must be sought by oneself: its conquest is absolutely personal! I had told you to search for the keys, and to spare yourself inconveniences, you sent your assistants to fetch them. And so, since they have acquired the keys, they are happy, and the very duties of this happiness keep them from returning to you and wasting the time, which they can use to teach others, who are more willing to find them. The proof of what I say is true is that, if they had found nothing, they would already have returned and would have continued to be in your service.

The great bourgeois was impressed by what had occurred, and seeing himself as an old man, since many years had passed while waiting for their return, he asked anxiously:

– Tell me: would I still have time to go myself? Would I also find these keys and be happy?

– You can go if you want; no one will stop you. But the life you have wasted uselessly will not return to you. You yearned to be happy; you felt this need when you were young and strong; nevertheless you preferred, like a good bourgeois, to have others do things for you while your life was consumed by idleness, boredom, fears and the anguish of unhappiness. Go, then, and seek them yourself if you have the strength to reach that goal.

We think that the following morale can be extracted from this narrative: One should not delegate to others what concerns one’s own knowledge. Happiness, whose conquest is exclusively individual, cannot be ordered from third parties.