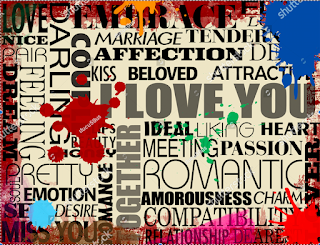 "The true love ... is the one that always lives in its world, working in silence for the good, done for goodness itself.  It is a tireless artist who creates and shapes images that later enrapture and captivate man’s feelings.  Without it, it would be impossible to conceive the beauties and enchantments of such refined manifestations of human feelings."
(Excerpt from the book "Logosophical Interlude")

"All things change considering different aspects or forms according to the circumstances that surround them.

A rose, being equal in beauty to all roses, becomes even more beautiful when it is offered to us as a present. It has taken on a new value and a different perfume emanates from its petals.

"Two things are essential to maintain pure and fresh the love for one’s beloved and prevent it from ever weakening. The first one is affection, which being less impulsive than passion, ensures its durability, because if passion injects life into love, affection is called upon to defend and preserve it.

"...I also understand now, as a result of your clear words, the difference that exists between common love and true love. The first is passionate, impulsive and full of violence.  As soon it awakens, the instincts take over; the desire to possess swells, thus tormenting the heart and subjecting it to  constant bitterness.  Jealousies, egotism and solicitude constantly disturb one’s mental action leading gradually to a reversal of one’s will; the polar equilibrium brakes, and a new foe emerges on the inner stage - anxiety - which deprives one of sleep.  With the advent of marriage, the equilibrium is restored as a result of the lavishness exercised in dealing with the inferior elements, but the tenderness of the feelings disappear.  By contrast, the other love, the real one - oh! Yes !.....- Now I understand better.  It is the one that does not blind the mind.  It is the one that, without ever disappointing us, offers the possibility of reaching happiness.
Excerpt from the book "Logosophical Interlude"
__________________________________

"The thought of true and conscious love for your fellow men... embellish in a very special way one’s features, creating tenderness in one’s eyes, a refreshing smile of happiness on one’s lips and a noble expression of one’s feelings in one’s soul.

You will not find this virtue in everyone, but every individual can possess at least a small portion of it. In order to achieve this you should give affability a place of honor in your life, for it concerns the embellishment of your spirit, which is the sublime part of the individual and manifests itself in the transparencies of the soul. The effort to attain affability links you to a force, because affability or the virtue of being likable is in itself an expression of force."
Excerpt from the book "Bases For Your Conduct"
___________________________________________

"Love must possess the aroma of perpetuity. If it does not, it is a mere illusion. When it suddenly emerges in your heart you should make sure that it contains all of those elements which will endow it with perenniality, and you should also see that such elements are found in the love that you are being offered in return.

One of these elements is constancy; another is patience. If we add tolerance to them we have put together the three basic elements of love.

Love is the first step towards starting a family. Consequently, after the wedding love must be firmly sustained by the three elements just mentioned, for this love will bring forth children whose upbringing and good moral and spiritual rearing will require their parents’ warm affection and a home harmoniously constituted."
Excerpt from the book "Bases For Your Conduct"
___________________________________________

"The little god, who had rehearsed his aim during their childhood, judiciously placed them again in front of his extended bow. It was then impossible for Griselda not to weave a thousand conjectures on her imaginary loom.

The hours, during this parenthesis, flew by inconspicuously. Withdrawal causes life to retreat discreetly from the external to fix its attention on what vividly impresses the inner self. Even if life lacks knowledge and experience during this prudent period of nature, one’s sensitivity, which is always more lucid than one’s understanding, calls love by its name, and one does not embrace it blindly as the instinct embraces passion. Human sensitivity, expressing nobility and sincerity, demands to be corresponded with honesty in its affection. This is why Griselda, while asseverating these clear precepts of morality that the feeling opposes to illusion and hope, felt an indescribable joy, and in this mood started early her long awaited day.
Excerpt from the book "Mister De Sandara"
_______________________________